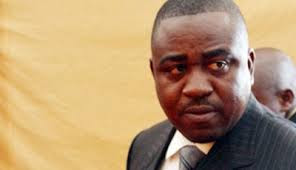 A Bureau De Change operator, Abubakar Umar, on Friday, told the Federal High Court in Abuja, how he allegedly helped a former Governor of Benue State, Gabriel Suswam, to convert N3.1bn to dollar and delivered the equivalent sum of $15.8m cash to the ex-governor, in 2014.

Umar appeared before Justice Okon Abang as the fourth prosecution witness in the trial of the former governor, who is now the Senator representing Benue North-East in the Senate.

Suswam is being prosecuted on money laundering charges along with his then Commissioner of Finance, Mr. Omodachi Okolobia.

The Economic and Financial Crimes Commission accused the two defendants of diverting a total sum of N3,111,008,018.51 belonging to Benue State.


The money was said to have been stolen from the proceeds of the sale of shares owned by the Benue State Government.

Led in evidence by the lead prosecuting counsel, Mr. Rotimi Jacobs (SAN), Umar said on Friday that a total of N3.1bn was paid into the account of his firm, Fanffash Resources, on the instruction of the former governor.

According to him, Suswam had asked him to give the details of his bank account to a woman he met with the ex-governor during their first meeting at the ex-governor’s residence in Maitama, Abuja.

He said the governor, through a company, Elixir Investments, subsequently paid the money to Fanfash’s account with Zenith Bank in tranches.

According to the witness, the first tranche of N413m was paid into his firm’s account on August 8, 2014 and its dollar equivalent was delivered to the former governor at his Abuja home two or three days thereafter.

The witness said, “The first money he put in my account was N413m. He said I should change it to dollar.

“I then called to tell him that I had changed it to dollar. He said I should bring it to him. I called him again to clear the gate that I was bringing the money to him.

“I picked a taxi and when I reached the place, I knocked and they asked who I was and I said I was Abubakar.

“When I entered, they opened another gate that leads to a garage and I then brought the money out of the car. The driver excused us.

“We now checked the money to be sure that what I brought was correct. The former Governor of Benue State checked it. I gave him the money and went out.

“The money was delivered to him in his house in Maitama. There were some subsequent payments from time to time.

“He and I were the only ones present when I delivered the money to him.”

Asked to react to the defence of the ex-governor that he did not receive any money from him, the witness said, “If I did not give him that money, I would have been dead since.”

Umar had earlier appeared as a prosecution witness when the case was before another judge of the court, Justice Ahmed Mohammed.

Justice Mohammed voluntarily withdrew from the case following two reports by Sahara Reporters alleging that he had taken bribe to make the case to go the way of the former governor.

On Friday, defence lawyers, Chinelo Ogbozor (for Suswam) and Michael Agara (Okolobia), opposed an attempt by the witness to clarify what led to his contradictory statements before Justice Mohammed.

Prosecuting counsel, Jacobs, urged the court to dismiss their objection.

Justice Abang fixed February 3 for the witness to continue his testimony.