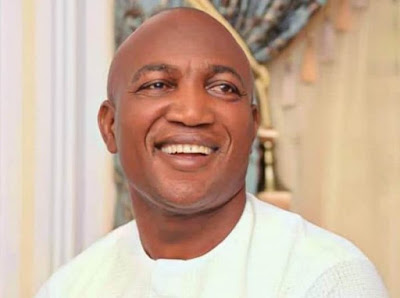 The Bayelsa State All Progressives Congress governorship candidate David Lyon’s hope of assumption of office on Friday (today) as the fifth governor of the state was on Thursday dashed by a judgment of the Supreme Court.

The APC and the Peoples Democratic Party were shocked by the judgment, which created uncertainty in Bayelsa State as both parties disagreed on its interpretation.

In the Supreme Court, there were signs that both parties did not expect any surprise as only a handful of their supporters were in the scanty courtroom when the case was heard and judgment later delivered.

The court nullified the election of Lyon and his running mate, Biobarakuma Degi-Eremienyo, who were declared by the Independent National Electoral Commission as winners of the November 16, 2019 governorship election in the state.

The judgment was delivered by a five-man panel of the apex court led by Justice Mary Peter-Odili.

The panel, in its unanimous judgment, ordered the candidates of the party with the next highest votes and the required constitutional spread of votes in the results of the governorship election declared by INEC to be sworn in as their replacements.

In what appeared to be a twist of fate, as the apex court was delivering the judgment, Lyon was rounding off preparations for his inauguration.

As part of the preparations, the ex-governor-elect did a rehearsal at the Samson Siasia Stadium, where he was driven round the main field in a motorcade on Thursday.

Also, the outgoing Governor of the state, Henry Dickson, a PDP member, had already concluded arrangements to meet with Lyon very early on Friday (today) with a view to handing over official documents to him at the state Government House.

A statement by the Chief Press Secretary, Mr Fidelis Soriwei, stated that Dickson was preparing to preside over a valedictory meeting of the state executive council when the news about the Supreme Court ruling filtered in.

At exactly 1:15pm on Thursday, the Supreme Court in its judgment in Abuja put paid to the preparations when it nullified the candidacy of Lyon’s deputy, Degi-Eremienyo, on the grounds that he presented false information about his educational qualifications in his Form CF001 submitted to INEC as a candidate for the 2019 election.

Justice Ejembi Eko, who read the judgment, noted that the claims” by Degi-Eremienyo appeared to be “fraudulent”, pointing out to “several names he uses variously chameleonically to suit the changing environment.”

He ruled that Degi-Eremienyo’s disqualification on the basis of submitting false information to INEC had infected the joint ticket with which he and Lyon contested the election and emerged victorious.

“Both candidates disqualified are deemed not to be candidates in the governorship election.”

Delivering the lead judgment, Justice Eko, nullified the APC’s victory, restored and affirmed the earlier judgment of Justice Inyang Ekwo of the Federal High Court in Abuja, which disqualified Degi-Eremienyo’s candidacy and nullified the party’s ticket for the poll.

He set aside the December 23, 2019 judgment of the Court of Appeal in Abuja which had contrary to the Federal High Court’s decision validated the former deputy governor-elect’s candidacy.

The appeal ruled upon by the Supreme Court was filed by the PDP, its governorship and deputy governorship candidates of the party, who had alleged in their suit originated at the Federal High Court in Abuja that Degi-Eremienyo presented to INEC, documents of academic qualifications with about nine variations of names different from the name that appeared on his Form CF001 submitted to the electoral commission.

He was said to have claimed to have obtained “his First School Leaving Certificate in 1976” and presented to INEC “a First Leaving School Certificate of one Degi Biobaragha other than the one bearing his name Biobaragha Degi-Eremieoyo as shown in his INEC Form CF001”.

He was also said to have claimed to have “obtained his West African Examinations Council General Certificate of Education in 1984” and presented to INEC, “a GCE certificate of one Adegi Bibakuo other than the one bearing his name Biobarakuma Degi-Eremieoyo as shown in his INEC Form CF001.”

The Federal High Court had held that there was no evidence to prove that the documents with different name variations were his.

Upholding the finding on Thursday, the apex court held that the affidavits of correction of names and regularisation of names filed by him were not enough as he ought to have followed the laid down legal procedures.

It held that “clearly, the lower court erred when it held that the affidavit of correction of names sworn to by the first defendant” had corrected the numerous discrepancies in his names in August.

He said, “Section 182(1)(j) of the 1999 Constitution provides that nobody shall be qualified for an election for the governor of a state if he has presented a forged certificate to the Independent National Electoral Commission”, adding that “the word fraud” could mean “fabricating, framing and inventing false identification and making deliberate falsehood”.

The Supreme Court ruled that the votes credited to the APC’s candidates were wasted.

It ordered INEC to withdraw the certificates of return issued to Lyon and Degi-Eremienyo as the winners of the poll.

It ordered fresh ones to be issued to the governorship and deputy governorship candidates of the party with the highest votes and met the constitutional spread of votes in the election.

It also ordered the newly declared winners of the election to be sworn in at the appropriate time.

No govt in Bayelsa, PDP candidate won’t be sworn in – Oshiomhole

The PDP and the APC National Chairman, Adams Oshiomhole, clashed over the interpretation of the judgment on Thursday.

Oshiomhole, in an interview with journalists in Abuja, vowed that nobody would be sworn in as Bayelsa State governor on Friday.

But the PDP, in a statement by its National Publicity Secretary, Kola Ologbondiyan, described Oshiomhole’s boast as empty and inconsequential.

Justifying his stand, Oshiomhole said, “It is not a state secret, if, as the Supreme Court has ruled, David Lyon cannot now be sworn; that the person, who has the highest number of votes and the spread, should be sworn in, it simply means from tomorrow there will be no government in Bayelsa State.

“But, as far as we know, the next candidate, as the facts are before the court, who happens to be a PDP candidate, does not have one quarter of the total lawful votes cast in that election in two-thirds of the local government councils in Bayelsa State.”

You are ranting, PDP tells Oshiomhole

But the PDP dismissed Oshiomhole’s statement. The party warned Oshiomhole to steer clear of Bayelsa State as his apparent plot to trigger violence in the state had failed.

It advised Oshiomhole to be careful with his utterances and “not to use any forms of venomous garrulity and clear misuse of language to destabilize our nation and truncate our hard earned democracy.”

Also, the Rivers State Governor, Nyesom Wike, berated Oshiomhole, and called on the Federal Government to warn him (Oshiomhole) to stop making inflammatory remarks capable of destabilising the country.

Wike, in an interview with journalists in Port Harcourt, condemned Oshiomhole for saying there would be no swearing-in of the PDP candidate in Bayelsa State.

The governor said, “The Federal Government should warn Oshiomhole to stop making remarks that will destabilise Nigeria. What he is doing in Edo State is not proper and he should not bring it to the rest of the Niger Delta.”

The 2019 presidential candidate of the PDP, Atiku Abubakar, hailed the Supreme Court for its judgment on the November 16 governorship election in Bayelsa State.

Atiku in his personal verified twitter handle @atiku, urged the apex court to be consistent in its judgment.

He also urged justices of the Supreme Court to always deliver just judgment no matter the parties involved.

The Presidency was also shocked by the judgment. It abruptly cancelled a scheduled press conference on Thursday as the news of the Supreme Court’s decision on Bayelsa State governorship poll shook the nation.

This came as it was gathered that the President, Major General Muhammadu Buhari (retd.), had also put off his scheduled visit to Bayelsa on Friday (today).

He was billed to inaugurate some petroleum industry projects. The presidential media team had earlier in the day fixed 3pm to address the State House Press Corps.

Findings indicated that the agenda was to address sundry issues, including adequate reaction to the booing of the President by Maiduguri residents on Wednesday and the need to have regular engagements with reporters on the activities of the regime.

But word suddenly came from their offices that the press conference had been cancelled, just as the apex court delivered its judgment.

The spokespersons gave no official explanations, but it was learnt that the cancellation was an immediate reaction to the court’s decision to avoid being put under pressure to comment on the development.

Efforts to get Shehu to comment on whether Buhari would still travel to Bayelsa today got no response.

The President’s advance party had since left Abuja ahead of him before the latest political development in Bayelsa happened on Thursday.

There were jubilations on Thursday in Yenagoa, the Bayelsa State capital, following the judgment of the apex court.

Supporters of the PDP thronged the Government House in Yenagoa singing and dancing even as they later moved into the Governor’s Lodge where they continued the celebration of the legal victory.

But the ruling generated shock waves among members, supporters and chieftains of the APC. Wrappers and uniforms bearing Lyon’s picture and that of his deputy, Senator Biobarakuma Degi-Eremineyo, had been printed in large quantities with sufficient food and drinks already purchased before their sacking.

As a result of the ruling, a podium being erected at the Samson Siasia Sport Complex venue of the swearing-in of Lyon was immediately dismantled as soon as news of the judgment broke.

The flags of APC earlier erected at the roundabout in front of the Government House, Yenagoa, were uprooted by PDP supporters.

Also at the APC secretariat, canopies already mounted ahead of Friday’s celebration were dismantled.

It was gathered that the leaders of the APC had booked major hotel accommodation for visiting guests ahead of the ceremony.

Some of the guests were said to have started arriving in the state capital before the nullification of the governor-elect’s election.

A hotel manager in Ekeki area of Yenagoa, who confided in newsmen, said they might refund money to those who booked for rooms but their guests had not checked in while there would be negotiation for rooms that guests had moved in.