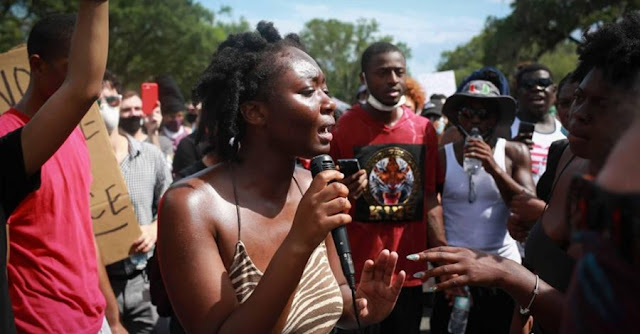 Oluwatoyin Salau, a 19-year-old Black Lives Matter (BLM) protester who begged for justice in the wake of Black lives lost, has been killed.

Police and her family confirmed the death Monday morning.


Salau was found dead Saturday night after she went missing more than a week ago, on June 6, family members told the Tallahassee Democrat, part of the USA TODAY Network.

Salau was one of two homicide victims discovered Saturday night in southeast Tallahassee, a couple miles from where she was last seen at a library.


Victoria “Vicki” Sims, 75, who also had been reported missing, was the second victim. She was a retired state worker and grandmother well-known for her volunteerism and work in local Democratic politics.

Police identified the suspect as Aaron Glee Jr, 49, who had been arrested twice recently for violent offences.

However, investigators have not released a motive or any other details about what led to the double homicide.

“There is no justice that can be served that will replace my sister’s life,” her brother, Oluwaseyi Salau said.

Oluwatoyin Salau was reportedly active at all demonstrations before she was declared missing.

She recited the names of Black people killed, such as Tony McDade of Tallahassee and George Floyd of Minneapolis.

“I don’t want their names gone in vain,” she said during one protest in front of the Tallahassee Police Department last month.

Though she went missing June 6, newly surfaced surveillance footage shows on Wednesday, June 10, Oluwatoyin Salau walked into Big Easy Snowballs in Tallahassee, according to owner of the ice cream shop. She asked to use the restroom.

That was the last known day she was seen alive.

The suspect in her killing, Glee, a black man, was arrested May 29 on a charge of aggravated battery after an officer stopped at a light spotted him kicking a woman in the stomach, according to police reports.

The victim in that case was neither Sims nor Salau.

The woman told police she and Glee had been drinking alcohol together and were walking down the sidewalk when he propositioned her for sex.

“She told him no. So Glee became angry, shoved (her) to the ground and began kicking her in the abdomen,” the police report says.

Online Leon County Court records show a misdemeanor battery charge filed against him June 6. However, those reports were not immediately available.

Glee was arrested last year on a charge of possession of marijuana. However, prosecutors dropped it, according to court records.