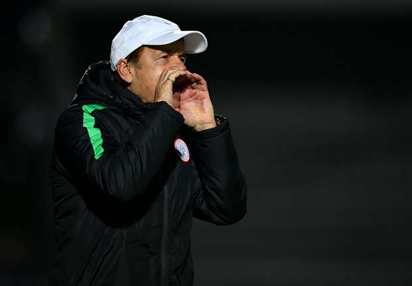 Super Eagles coach Gernot Rohr has stated in clear terms that players from the Nigerian Professional Football League are not good enough for his team.

Rohr has continued to overlook outfield players from the NPFL in his team, a decision that has raised eyebrows.

Only Heartland keeper Ikechukwu Ezenwa has been able to break into the German tactician’s squad in the past five years, since he became the coach of the national team.


Rohr, who signed a new two-and-a-half-year deal with the Nigerian Football Federation in May, also revealed that his future at the helm of affairs is linked to a successful Africa Cup of Nations in Cameroon in 2021.

“Because they are not good enough and because I have better ones,” Rohr replied during an interview with Morgenweb.com when asked his reasons for snubbing players from the NPFL.

“There are so many good players in Europe. I have invited more than 20 local players since 2016. If they are good, sooner or later they all end up in Europe.

“It (my contract) is linked to a successful Africa Cup of Nations.”

The 66-year-old German also said talks are ongoing for the AFCON to be postponed to next summer due to COVID-19 which has ravaged the world and the global economy.

It was gathered that the Executive Committee members of the Confederation of African Football will meet Tuesday to decide on new dates for their showpiece event.

The qualifiers have already been postponed, with only two rounds of matches played, while the 2022 World Cup qualifiers are slated for October and November.

“No, not yet precise. Hopefully in September, but then without spectators. We are talking about postponing the Africa Cup of Nations from the beginning of the year to the summer. That would be good.”

He admitted that luring the quartet Joshua Zirkzee, Kevin Akpoguma, Jordan Torunarigha and Felix Uduokhai to play for the Eagles won’t be easy. “Zirkzee is a preferred candidate, but it’s not that simple. We cannot and will not poach him, that must come from the player himself,” he added.

“There are a few others in the Bundesliga like Kevin Akpoguma in Hoffenheim, Jordan Torunarigha at Hertha BSC and Felix Uduokhai in Augsburg. But we can’t get them so easily.’

Rohr also stated that he rejected offers from Mali and Congo to sign a new deal with the NFF.

Under the terms of the new deal, Rohr will be expected to spend the majority of the year in Nigeria, take a pay cut, and be paid in local currency.

Rohr previously managed the national teams of Gabon, Burkina Faso and Niger Republic, before taking charge of the Super Eagles.

“No, but they were a bit slow. President Pinnick and I wanted to meet in January, but I couldn’t,” Rohr continued.

“Then came the coronavirus and lockdown. Actually, we agreed, it was only about details. Finally, the sports minister also interfered.

“I had requests from Congo and Mali, which I refused.”