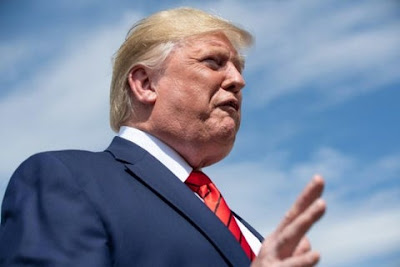 US President Donald Trump on Friday signed an executive order pledging to enforce prosecution of protesters who vandalise public memorials, as he announced he was skipping a weekend at his New Jersey golf resort to ensure “LAW & ORDER” in Washington.

Trump’s order follows a wave of civil unrest across America triggered by the killing of unarmed African American George Floyd, who died while a white Minneapolis police officer knelt on his neck.

In some cities, protesters have pulled down or vandalised statues and memorials of historical figures – such as Confederate leaders – who defended slavery.


“Long prison terms for these lawless acts against our Great Country!”

He added, “I was going to go to Bedminster, New Jersey, this weekend, but wanted to stay in Washington, D.C. to make sure LAW & ORDER is enforced.”

In Washington, protesters have pulled down a statue of Confederate general Albert Pike, while others this week were unsuccessful in their attack on a statue of President Andrew Jackson, a slave owner, near the White House.

Those who have pulled down or defaced monuments “seek nothing more than to destroy anything that honors our past and to erase from the public mind any suggestion that our past may be worth honoring,” the White House said.

The order calls for “enforcement of laws that carry firm penalties of incarceration for those found guilty of desecrating public monuments” – without announcing any new regulations.

“President Trump will never allow violence to control our streets, rewrite our history, or harm the American way of life,” the White House said.

0 Response to "Trump signs order to punish vandalism against monuments"