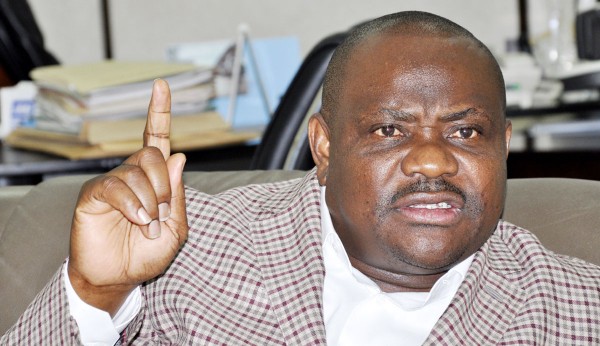 Rivers State Governor, Nyesom Wike, has called on Nigerians not to allow the All Progressives Congress to continue to keep the country in its current calamitous state.

This was as the governor said he was not nursing the ambition of running for the office of the President of Nigeria.

Wike, who spoke when he appeared as a guest on Arise Television, explained that the Peoples Democratic Party was interested in taking over power in 2023 with a view to moving the nation forward and out of its current state.

“The APC should not be allowed to continue to keep the country in its present calamitous state. We want to take over to move Nigeria forward,” the governor said.

On speculations that he was gunning for the presidency, Wike stated, “Right now, I am focusing on delivering the dividends of democracy to the people of Rivers State.

“To clear every speculation, let me state that I am not going to run for the office of the President of Nigeria for now. I am concentrating on developing Rivers State. I am not a party to anybody saying that the problem in the PDP is about 2023.

“That can be the problem in the APC because it is the ruling party. This is the last tenure of Mr President and he is going. So, people are hustling to take over from him within his party. The PDP has nothing to do with that because the way it is now, we are taking over from nothing.”

Commenting on former Vice-President Atiku Abubakar’s aspiration to contest for the presidency again, Wike said it was a fundamental right that could not be denied.

The governor described as unfortunate the failure of security agencies to apprehend members of a pro-Amaechi group that threatened to destroy the state.

Posted by Dayoung on Sunday, 28 June 2020 - Rating: 4.8
Title : We need to stop APC from destroying Nigeria in 2023 - Governor Wike
Description : Rivers State Governor, Nyesom Wike, has called on Nigerians not to allow the All Progressives Congress to continue to keep the country in ...