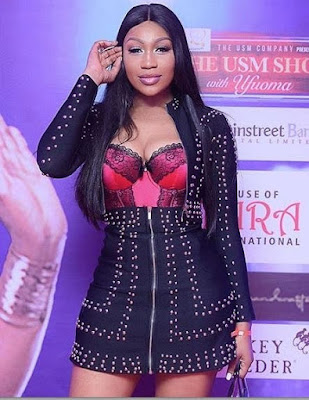 Nollywood actress, Ebube Nwagbo needs little introduction as she has been in the industry for a very long time, doing what she knows how to do best, acting.

Although her attention has been arrested by other concerns like her clothing line “Poshed Up by Eb” Ebube remains a force to reckon with in the industry and her wealth of experience may just come handy for many up and coming actors looking to make a score in the make-believe world.

“Well, I don’t know about the naughty girls, everybody has their own side of the story, so I’m going to go with what I know. The industry is a big place, everybody comes from different places, different life backgrounds, and different stories, at the end of the day we don’t know who is here to do the right thing.


If you’re here for the wrong reasons then you’re not going to last, and that’s just the truth. So, everybody I’ve come across is all here for a reason, so I don’t know about the prostitutes or the naughty girls invading Nollywood,” she had said modestly.

Ebube admits being an actress comes with some sacrifices and awkward moments. When asked how often she had been embarrassed, she said, “ That happens like every day. I can’t even think of any particular one, but it’s sure going to be from the male fans, like they see you and forget that you’re the one and just want to grab you and squeeze you in front of people, and you are trying to be the star that is not rude, but at the same time it is embarrassing, what can you do.”

Ebube’s journey into movies started in 2003 at the age of 20 (now 37 years old) with the movies Arrested by Love, Eyes of the Nun and Before my Eyes.

The actress’ brilliant roles in the aforementioned movies, as generally believed, played influential roles in launching her into the limelight.

Posted by Dayoung on Sunday, 5 July 2020 - Rating: 4.8
Title : If you are in Nollywood for wrong reasons you won’t last – Ebube Nwagbo
Description : Nollywood actress, Ebube Nwagbo needs little introduction as she has been in the industry for a very long time, doing what she knows how t...