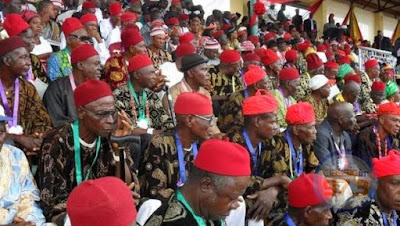 The Ohanaeze Ndigbo General Assembly Worldwide has sued the Corporate Affairs Commission for N500bn for deregistering it.

The President General of the body, Basil Onyeacholam, a lawyer, disclosed this to our correspondent on the telephone on Thursday.

The CAC had reportedly deregistered the group, stating that it did not meet some conditions.

Recall that following the inauguration of the new Ohanaeze group about a week ago, the mainstream Ohanaeze Ndigbo, led by Chief Nnia Nwodo, had called its members rabble-rousers and buccaneers.


But on Thursday, Onyeacholam said, “The CAC does not have the right to withdraw a certificate of incorporation because the provisions of the law are very clear.

“We pursued this particular objective and the CAC wrote to us on 27th of January, 2020, notifying us of the approval of the Ohanaeze Ndigbo General Assembly. That name was approved by the CAC.

“We made newspaper publications to this effect. And the law requires the publication a duration of 28 days. The purpose of this duration is to enable the members of the public to object or there could be a petition. And these publications were made and there was no objection.

“Based on this, the CAC does not have the right to wake up one morning and say it has deregistered Ohanaeze General Assembly. It’s not done that way.

“The certificate is with us. It’s only the court of law that can give a verdict on this.

“We are going to court, and amongst the orders we shall be asking the court to make will include damages against the CAC to the tune of N500bn.

Meanwhile, the Ohanaeze Ndigbo on Thursday said there was no crack in the leadership of the organisation led by Chief John Nnia Nwodo.

Ohanaeze, which insisted that it was Igbo’s turn to produce a President of Nigeria after the President, Major General Muhammadu Buhari (retd.), said  enemies of Ndigbo were behind the purported registration of the factional Ohanaeze Ndigbo General Assembly.

The deputy National Publicity Secretary of Ohanaeze, Chief Chuks Ibegbu, in a statement said that the purported crisis or division in the leadership of the apex Igbo body was a figment of imagination of misguided elements.

“These elements are used by Igbo enemies with peanuts to cause confusion in Igbo land and they will be ostracised in Igbo affairs for this treasonable act. The Federal Government should probe the CAC activities.

“Meanwhile, Ohanaeze Ndigbo will be building bridges and links with all parts of Nigeria to realise the 2023 presidency; its Igbo turn to produce Nigeria President after President Buhari.”