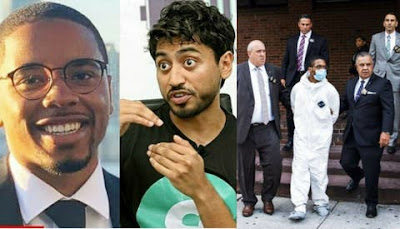 Fresh facts have emerged that the prime suspect in the gruesome murder of Gokada founder and Chief Executive Officer, Fahim Saleh, bought an electric saw and some cleaning supplies seen at the scene of the incident.

Manhattan prosecutors revealed the details in a criminal complaint filed against Haspil, who was arraigned on a second-degree murder charge on Saturday, according to The Wall Street Journal.


Police gathered that Haspil allegedly stole about $100,000 from the late tech entrepreneur but rather than handing him over to law enforcement agents, the late Gokada CEO brokered a repayment plan with him.

He was arrested on Friday in connection to the murder of Saleh whose decapitated and dismembered body was found at his seventh-floor apartment on the Lower East Side of the city.

Homicide detectives had said CCTV from Monday afternoon showed a man identified as Haspil following Saleh up the elevator to the full-floor, two-bedroom apartment.

The masked person following Saleh was dressed entirely in black, according to a law enforcement official who was briefed on the case.

But Haspil’s counsels said investigation was ongoing and no conclusions should be made yet.

“We are in the very earliest stages of ferreting out the truth. The life of this case promises to be long and complex. As the attorneys for Mr Haspil, we urge the public to keep an open mind,” read a prepared statement from Legal Aid Society attorneys Sam Roberts and Neville Mitchell.