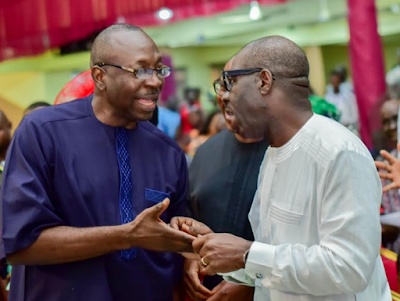 Apparently disturbed by the drumbeats of war echoing ahead of the Edo guber polls on September 19, the apex electoral body, the Independent National Electoral Commission, INEC has insisted that Governor Godwin Obaseki and his rival, Pastor Osagie Ize-Iyamu must sign a peace accord next week Tuesday.

The apex body on Electoral matters made this declaration in a press briefing  in Abuja ahead the guber polls.

Chairman of INEC, Mahmoud Yakubu said the candidates participating in the September 19 governorship election in Edo State will sign a peace accord on Tuesday.

Mahmood also said about 17,000 ad hoc staff would be recruited for the election, noting that the PTF guidelines and safety measured would be strictly obeyed as the commission was going to operate a no-facemask, no voting policy at the poll.

Before now, the reverred Oba of Bini too had summoned both Obaseki and Ize-Iyamu to the palace where he cautioned both leaders and their followers to shun violence and embrace peace before and after the guber polls.

Tension and fears of bloodshed had gripped Edolites who believe that the election may lead to turmoil if not quickly nipped in the bud.

Posted by Dayoung on Friday, 11 September 2020 - Rating: 4.8
Title : Edo 2020: Obaseki, Ize-Iyamu must sign peace accord – INEC
Description : Apparently disturbed by the drumbeats of war echoing ahead of the Edo guber polls on September 19, the apex electoral body, the Independe...