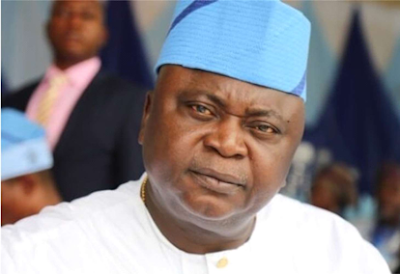 The crisis rocking the Ogun State chapter of the Peoples Democratic Party (PDP) took a new twist on Friday as the Hon. Ladi Adebutu’s faction took over the party’s secretariat from loyalists of late Senator Buruji Kashamu.

The takeover of the party secretariat in Abeokuta is coming less than a month after the death of Kashamu, whose loyalists have been occupying the building for almost five years.

It will be recalled that the two factions had earlier held parallel congresses to elect new state executive officers of the party.

The Adebutu faction has Hon. Sikirulahi Ogundele as its State Chairman, while the Kashamu faction is headed by Hon. Samson Bamgbose.

It was gathered that Adebutu and his group have the backing of the Uche Secondus-led PDP National Working Committee.

But, the late Senator Kashamu and his followers relied on a 2016 court judgement to conduct their congresses without the input of the PDP NWC.

The group said, “in line with the judgement of the Federal High Court, Lagos, in Suit No. FHC/L/CS/636/2016, the PDP Ward, Local Government and State Congresses were held in Ogun State on the 7th of March, 21st of March and 3rd of April 2020 respectively.”

Akinloye Bankole, the Publicity Secretary of the Adebutu PDP faction has confirmed the new development to our correspondent.

According to Akinloye, “the secretariat was handed over to the state Chairman, Alh. Sikirulahi Ogundele, on Friday afternoon by the (Ogun State) Commissioner of Police on the instructions of the IGP.”

Reacting, Hon. Samson Bamgbose, the Chairman of the Kashamu faction of the PDP in Ogun, frowned at what he termed the “illegal takeover” of the party secretariat on Friday, saying the action will be reversed in due course.

A statement issued on Friday by Bamgbose quoted him as saying that it was, “most disturbing that in a democracy, the Commissioner of Police in Ogun State, Mr. Edward Awolowo Ajogun, could allow himself and the Command to aid and abet some dissidents to invade and forcibly take over our Party Secretariat in flagrant disregard for valid and subsisting orders and judgements of courts.”

While urging his loyalists to remain law-abiding, Bamgbose expressed confidence that the action would be reversed in due course.

“We wish to implore our teeming supporters and party faithful to remain calm, knowing that this illegality like others before it will not stand the test of time and the law,” he said.