Home » News » We have caged the Edo Lions and Tigers - Obaseki

We have caged the Edo Lions and Tigers - Obaseki 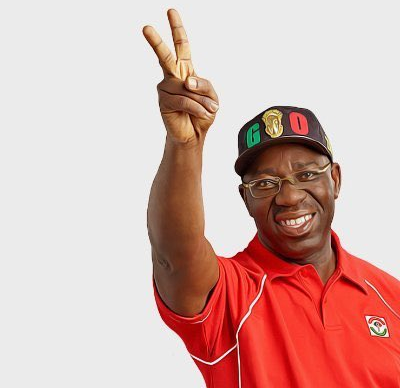 Gov. Godwin Obaseki has said that his re-election for another four years has finally sent the lions and tigers into the zoo to be caged permanently from Edo politics.

He used the lions and tigers figuratively to refer to the godfathers who had lorded it over politicians in the state.

He did not mention any name, but the references were clear enough. Adams Oshiomhole and Captain Hosa Okunbo were the big names who had vowed to topple him.


Obaseki spoke on Monday in Benin while addressing a crowd of PDP supporters at the popular Kings square shortly after a victory march round the Benin Metropolis.

According to him, the message of Saturday’s governorship election means that he should go and work for Edo people.

” It is clear, the Edo people have spoken loud and clear.

“You have helped me cage the lions and tigers in the State, you will never see them again in Edo because they are all in the zoo now wheretheybelong.

“Today, I promise you that we will work for Edo people because no one will hinder us from delivering the dividend of democracy to Edo people.

“My Deputy, Philip Shaibu, and I will go back to the office and work for Edo people. I want to thank everyone residing in the state; you spoke and we have heard you and ready to ever work for you.

“The next four years in the state will be the one that all citizens will live to remember as we will consolidate on our developmental achievements in the State. Thank you all,” he said.

The Chairman of Edo PDP Campaign Council, Mr Dan Orbih, said that the victory had shown that Edo people rejected godfatherism, money bag politics and given the mandate for development of the State.

“With your support and votes you have started a new dawn in Edo Politics, Nigeria’s democracy and by extension that the State will never remain the same again as Obaseki’s re-election has ended godfatherism in the State.

READ ALSO No police aides for Obaseki, Ize-Iyamu, Oshiomhole on Edo election day
“Obaseki’s re-election has shown that Edo people are wiser, and the state is on the path of development as the people have spoken loudly and have finally silenced godfatherism in Edo Politics,” he said.

Posted by Dayoung on Monday, 21 September 2020 - Rating: 4.8
Title : We have caged the Edo Lions and Tigers - Obaseki
Description : Gov. Godwin Obaseki has said that his re-election for another four years has finally sent the lions and tigers into the zoo to be caged p...