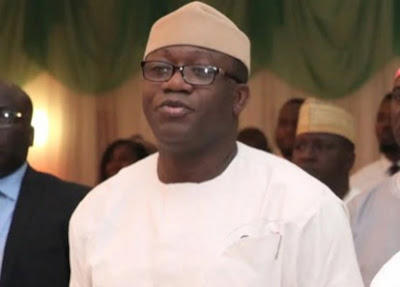 The Peoples Democratic Party (PDP) in Ekiti State has thanked the State Governor, Dr Kayode Fayemi, for painting and commissioning the Oja Oba Market in Ado Ekiti, which was constructed by the administration of Mr. Ayodele Fayose.

The party, which also demanded explanation on the N2.75 billion allocated for construction of the market in the N20 billion obtained in 2012 by Fayemi’s administration, said it was misleading for the governor to claim that he conceptualized the market project and that it was only executed up to 55 percent level when Fayose left office.

In a release on Friday, by the State Publicity Secretary, Raphael Adeyanju, the PDP said “the Oja Oba Market, Ado Ekiti was only conceptualized on billboards by Fayemi, despite availability of the N2.75 billion allocated for the project in the N20 billion bond he took in 2012.

The party insisted that the project was executed up to 90 percent level before Fayose left office and over N400 million was left for the payment of the contractor upon completion of the project.

It added that even though Governor Fayemi used one paragraph of his speech during the commissioning to give credit to Fayose, the people of Ekiti will not need anyone to tell them whose government did the project.

While calling for transparency in the allocation of the over 800 shops in the market, the PDP reminded Governor Fayemi that his predecessor, who constructed the market, promised to give priority to those whose shops were demolished to pave way for the new market.

The party also said allocation of the shops must not be done on the basis of politics, adding that the market belongs to Ekiti and its people and those who will benefit from it must not be on the basis of loyalty to the governor and his party, All Progressives Congress (APC).

The PDP said those whose allocations were cancelled in 2018 when the governor assumed office should also be considered.