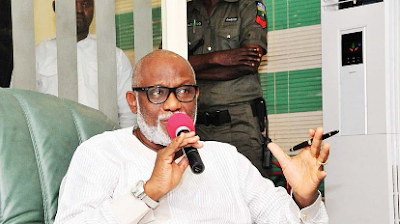 Governor Oluwarotimi Akeredolu of Ondo State has commended the End SARS protesters in the state and in other parts of the country as he stated that their struggles have brought an end to the dreaded police unit known as the Special Anti-Robbery Squad, SARS.

According to Akeredolu, a committee has been set up to receive complaints from members of the public on illegal detention, extortion and brutality by officers of the Nigeria Police Force in the state.

Governor Akeredolu disclosed that the committee will be headed by a retired Chief Judge and would commence work next week.

The Governor made this known while addressing the End SARS protesters in front of the Government House, Alagbaka, Akure.

He urged the protesters to take advantage of the committee by bringing to their notice all complaints and issues around police brutality, extortion and harassment.

“So, right from the President to the Vice President, to the Inspector General of Police, all of us held a meeting yesterday at the National Executive Council and we made it clear that there must be a reform of the Nigeria Police. And it has to be reformed.

“Now, we have to set up a committee here to be headed by a retired Chief Judge so that all your complains you will file to them. If you have anybody who is under any detention anywhere in the state, you will bring it to the notice of the committee.

Earlier, popular social media influencer and #EndSars Advocate, Yemi Fasipe popularly known on Twitter as @YemieFASH urged Governor Akeredolu to use his good office to bring an end to the extortion and harassment of Police Officers particularly at the, “Scorpion”and”Anti-cultism,” squads in the state.

Posted by Dayoung on Saturday, 17 October 2020 - Rating: 4.8
Title : #EndSARS: Akeredolu commends protesters, constitutes committee
Description : Governor Oluwarotimi Akeredolu of Ondo State has commended the End SARS protesters in the state and in other parts of the country as he st...