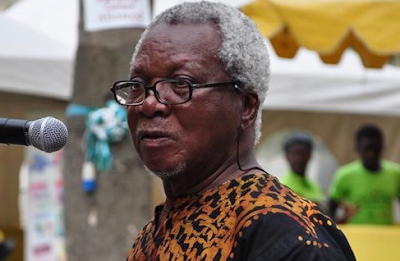 The family of the late renowned emeritus professor of literature and poet, Professor John Pepper Clark on Thursday honoured the final wishes of the literary giant that his body should be interred within three days of his death without any form of fanfare.

As the late Clark would want it, his body was committed to mother earth at exactly  11.30p.m., on Thursday in his island country home in Kiagbodo town, Delta State, after a brief lying in state for few family members.

Clark was buried after few words of prayers by Pastor Ituah Ighodalo represented by Pastor Jolomi Guoti and Pastor Ken Okochu of Trinity House, while surrounded by his widow, children and few family members at the graveside near his parlour, which he had long prepared.

According to family sources, the late Clark had specifically stated before death that he should be buried within three days of his transition and should not be kept in mortuary or taken to any place of worship for funeral service.

The reknown late literary giant was given a peaceful burial also in accordance to his last wish, as only few family members were allowed into the house during the lying in state.

Late JP Clark’s corpse earlier landed Kiagbodo main town at about 8:48 pm, before it was conveyed in a wooden boat to his house at JP Clark Creek Island in the outskirt of the community.

The casket was carried by community youths from Delta State Government Ambulance that brought the literary icon from the Asaba International Airport.

It was gathered that the that Clark died on Tuesday in the comforting arms of his wife, children and siblings. He was younger brother to former Federal Commissioner for Information and South-South Leader, Chief Edwin Clark.