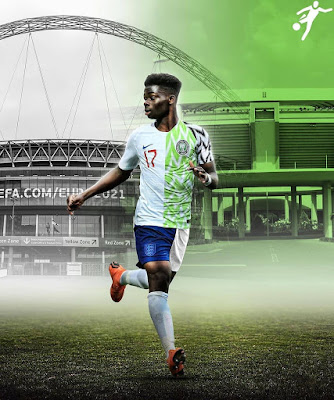 Arsenal’s Bukayo Saka has expressed delight at being invited to the England national team for the first time.

Saka was born in England but also eligible to play for Nigeria through his parents but chose the Three Lions over the Super Eagles.

“Honoured and grateful to get my first England call up ! #Blessings,” Saka wrote on Twitter.

The 18-year-old was in fine form for Arsenal last season, where he featured mostly as a left wing-back.

He was named third in the Gunners Player of The Season poll behind captain Pierre-Emerick Aubameyang and Bernd Leno. He also emerged Whoscored.com’s Europa League Young Player of The Year.

NFF President Amaju Pinnick had in an Instagram Live in June said the federation was not going to beg the youngster to play for Nigeria.

“There are many players that play like Bukayo Saka in Nigeria. We don’t want to go begging any player,” Pinnick said.

Posted by Dayoung on Thursday, 1 October 2020 - Rating: 4.8
Title : "I’m honoured to get England call-up" - Saka says as he dumps Nigeria
Description : Arsenal’s Bukayo Saka has expressed delight at being invited to the England national team for the first time. England manager Gareth Sou...