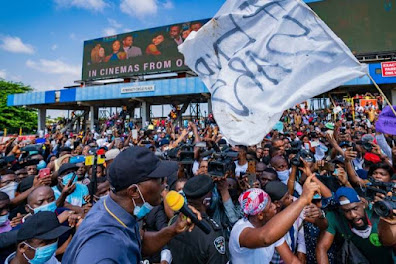 An #EndSARS protester, Samuel Isah, has narrated how a young man with the Nigerian flag in his hand was allegedly felled by gunshots fired by policemen at the Lekki tollgate in Lagos on the night of October 20.

Isah, in a petition filed before the Lagos State Judicial Panel of Inquiry, said, “That young man was hit by a bullet in his head and died immediately, falling to the road with the Nigerian flag in his hand.”

He said just before then, he had witnessed how “another young man in his late twenties” was killed by the bullet fired by the police.”

According to Isah, the policemen dressed in their uniform, as well as another man wearing white native attire arrived at the tollgate in a police van around 11.30pm and “began to shoot directly at protesters.”

“When they stopped shooting, I joined other protesters to carry the dead young man and took his body close to the police officers that were shooting and told them in a loud voice, ‘You have killed this young man’.

“They opened fire again. I ran with others to the Lekki Phase 1 Roundabout for safety,” Isah said in the affidavit he submitted to the retired Justice Doris Okuwobi-led panel last Saturday.

He said in the morning of October 21, he went to Reddington Hospital, Lekki Phase 1 “where most of the injured protesters were receiving treatment” adding that at the hospital, “I saw a dead protester on a bed placed on the floor of the hospital.”

Isah said he had a recorded interview he conducted with many of the injured protesters on his mobile phone and had attached it to his petition.

He said he had also submitted another video footage taken with his phone of how soldiers, earlier around 6.45pm, arrived the tollgate and opened fire and killed protesters.

“While I sat down on the road, I was able to start a video recording on my phone.”

Isah said in his affidavit that since Lekki shooting incident “I have been experiencing psychological trauma based on the experiences of that day.”

But the Nigerian Army had consistently denied killing any protester during the tollgate shootings.