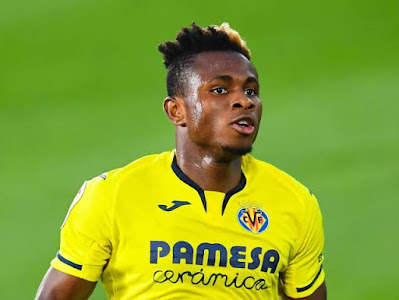 Manchester United are prepared to secure the signing of Villareal winger Samuel Chukwueze in January.

Real Madrid, Chelsea, Everton, Leicester City, Liverpool and Wolves are also looking to lure the 21-year-old away from the El Madrigal outfit it was also revealed.

According to La Razon, The Red Devils are willing to activate the release clause of £71m for the Nigeria international.

He has netted one goal and provided three assists in seven starts for Villarreal in the current LaLiga campaign.

Manchester United are struggling after failing to sign top targets like Jadon Sancho – but the Red Devils have also been linked with a move for the Borussia Dortmund and England forward again, while there are now suggestions they also want former Spurs star Christian Eriksen.

Chukweze has made 90 appearances in all competitions since joining Villarreal from the Diamond academy in 2017, scoring 13 goals with 12 assists.

He has also made 14 appearances for Nigeria and scored twice thus far.