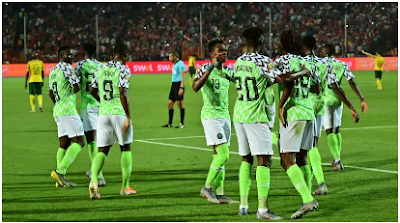 The Super Eagles of Nigeria were held to a 4-4 draw by Sierra Leone in an Africa Cup of Nations qualifier on Friday, after going 4-0 up in the first half.

Iwobi grabbed his brace from long range and Samuel Chukuweze dribbled his way past a couple of challenges to slot home.

However, the visitors made it 4-1 through Kwame Quee.

In the final 28 minutes of the game, Al-Hadji Kamara scored a brace and Mustapha Bundu also got on the scoresheet, as Sierra Leone grabbed a shock result.

What did we learn from this eight-goal thriller?

1. Rohr’s bad in-game management: I don’t know what the German tactician told his team during the break when it was 4-1. But as soon as it was 4-2, Rohr should have seen the game running away from the Super Eagles and taken decisive action. Either by changing personnel or his shape/system. This shambles further adds armoury to those of us who are not tickled by the former Bordeaux man.

2. Don’t bring back Musa, Onuachu: Ahmed Musa, who is now without a club, was totally ineffective for the hour or so he played. His role was unclear at times and he added nothing. The former Leicester City winger’s time with the national team might just be over. Onuachu came on in the second half and also offered zilch. One wonders if there are no decent Nigerian strikers out there better than him.

3. Osimhen a big miss in Freetown: While contesting for a pass in the penalty box, Osimhen fell awkwardly and injured his wrist. The Napoli striker was wheeled away by a pitch ambulance and he is now a doubt for the reverse fixture in Freetown. One wonders if Rohr will stick with Onuachu or give Iheanacho to lead the attack.

4. Brave Leone Stars: Credit must be given to the Leone Stars for smelling blood and going all out for it. Going into the break a 4-1 must have breathed new energy into the team, but as soon as they made it 4-2, they conducted waves after waves of attack as Nigeria panicked. And they were duly rewarded.

5. Bad pitch, worse NTA: Not blaming the Samuel Ogbemudia pitch (not as if there are better options all over the country), but it was difficult to play good football. The painful viewing was made worse by the terrible camera angles of the Nigeria Television Authority (NTA). We have a long way to go, if we desire to make local football a big thing.

Posted by Dayoung on Saturday, 14 November 2020 - Rating: 4.8
Title : Nigeria vs Sierra Leone: Things we learnt as Super Eagles throw away four-goal lead
Description : The Super Eagles of Nigeria were held to a 4-4 draw by Sierra Leone in an Africa Cup of Nations qualifier on Friday, after going 4-0 up in...

0 Response to "Nigeria vs Sierra Leone: Things we learnt as Super Eagles throw away four-goal lead"