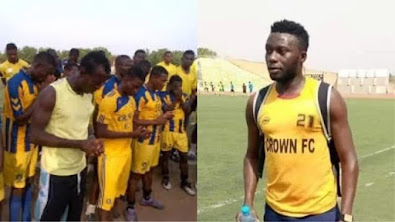 It was gathered that Yusuf played the first half in a friendly for Gateway United FC, where he was on trial, against Sliema Wanderers.

It was gathered that the incident happened on Sunday afternoon at Muda Lawal Stadium, Asero, Abeokuta.

The deceased reportedly slumped during the match, but he was resuscitated after the medics attended to him.

He was later taken to the State Hospital, Ijaye where he reportedly passed on.

The Media officer of the Gateway FC, Moses Ojewumi, confirmed the incident on Monday in Abeokuta.

He said, “Usman Yusuf who came on trial played the first half in a friendly for Gateway United FC against Sliema Wanderers on Sunday afternoon, during half-time he showed bad signs and Gateway United team doctor attended to him.

“It was later in the night, a call came in from camp that he had suffered a relapse, swiftly he was taken to State Hospital, Ijaiye where he gave up the ghost.”

He quoted the Acting General Manager of Gateway United, Niyi Soleye, as expressing shock over the incident, describing it as unfortunate.

Soleye said, “Quite unfortunate, our medical team attended to him on the pitch at half-time and he was stable only for us to get a call that he had suffered a relapse, and we made arrangements and promptly conveyed him to the state hospital, Ijaiye only to hear that he passed on. Still in shock.

“He was an ebullient player with huge potential. May the Almighty give the Crown FC the strength to bear the loss.”

Ojewumi also quoted the Gateway United Coach Akeem Busari as saying the late player “didn’t show any signs of illness when he came for trials and didn’t die at the camp as it was erroneously reported in some quarters.”

0 Response to "Nigerian footballer slumps, dies on the pitch"