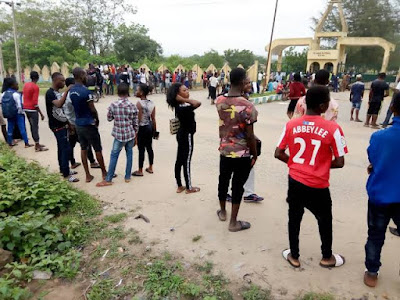 Scores of youths and students from Ibarapa geo-political zone in Oyo State, on Tuesday protested the killings of thier kinsmen.

It was gathered that many farmers and other innocent residents of the area had been killed by some people suspected to be either kidnappers or armed robbers.

The latest killing is that of a chieftain of the ruling Peoples Democratic Party (PDP) in the state, Dr. Fatai Aborode.

But, youths and students in the zone had on Tuesday protested against incessant killings in the zone.

Some of the youths described kidnapping as a recurring decimal with many residents of Ibarapa land constantly living in anguish and fear.

One of the protesters, Mr. Oladiran Oladokun while addressing journalists, urged the State government to mandate Caretaker Chairmen in the zone to clear bushes in Ibarapa land.

Oladokun, who doubles as Convener, Igangan Development Advocate (IDA), urged the State government to openly condemn such killings and other dastardly acts in Ibarapa land.

He decried that the State anti-grazing law had only remained on paper with no implementation.

Oladokun said, “We are not anti-government; we are also in government and we want the government to work.

“During election times they can come to our own Ibarapa and seek for votes and now that we are being slaughtered, where is their presence?

“Where is the government presence and why have they been silent since these issues have started?

“Why hasn’t the government made any open denouncement of these and we are left in silence?”

Posted by Dayoung on Wednesday, 16 December 2020 - Rating: 4.8
Title : Ibarapa youths, students protest killing of kinsmen
Description : Scores of youths and students from Ibarapa geo-political zone in Oyo State, on Tuesday protested the killings of thier kinsmen. It was ga...