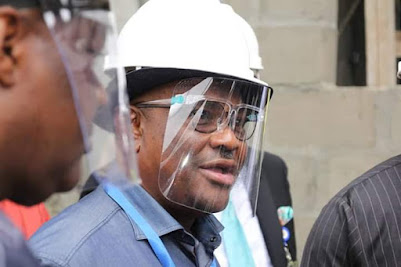 A faction of Rivers chapter of All Progressives Congress, APC, loyal to Chibuike Rotimi Amaechi, the Transportation Minister,  has accused Governor Nyesom Wike of turning himself into a “Super Spreader” of Coronavirus with the way he has been bringing people together for his ongoing Commissioning of roads projects.

The party, in a statement by Isaac Abott Ogbobula, its Acting Chairman Caretaker Committee also claimed that at least, 10 commissioners in the cabinet of the Governor had contracted COVID-19 during the commissioning of projects.

It  therefore asked Wike to stop endangering the lives of Rivers People with the commissioning events that are massing up People.

In the statement, the party said it is concerned by the number of confirmed cases of people who have become infested by the coronavirus in the State.

The party acknowledged that it has received reports which suggest that the spike in cases of the virus in the state is traceable to the ongoing commissioning of projects by the State Governor and members of his team.

“Governor Wike is aware that Covid-19 protocols do not allow the assemblage of huge crowds in one place. We have noticed that in course of the ongoing crowd – oriented events instigated by the Governor, social distancing a critical requirement for avoiding the spread of the Coronavirus is not being observed.

“As a result of the nonchalant attitude of the administration towards the observance of set down Covid-19 guidelines, many  Rivers people including Commissioners, high ranking government and party officials  are being afflicted by the disease.

“We have received worrying intelligence which indicates that no less than 10 serving Commissioners in this administration have tested positive to the diseases. Many more are reputedly contracting the disease as a result of the deviant behaviour of the Rivers State Government and the occupant of Government House.

“We have also gathered that attempts are currently being made by the State Government to deliberately suppress the release of information pertaining to the infection of serving Commissioners by the virus as a result of the commissioning events that are taking place at this time.

“We challenge Governor Wike to deny this is not the case. We ask him to tell the people of the State the truth about what is happening to some of his Commissioners who have reportedly embarked  on self-isolation.

“Our concern is that unsuspecting Rivers people are being led as sheep to the slaughter by a Government whose primary responsibility it is to protect them from harm’s way. We think that the action of the State Government which could result in the community spread of the virus is despicable and totally unacceptable. Everything should not be tied to power and political gain.

“You will recall that the same Government organized a party Congress last year in the midst of a national campaign to halt the spread of the virus. The consequences of that action which took a toll on some members of the PDP cannot be easily forgotten.

“Americans are dying at a rate that is frightening due to this type of reaction by a Government that should be democratic and responsive. We do not want to imagine that we have someone in the mold of a President Donald J. Trump who would be responsible for avoidable deaths in Rivers State.

The party said while it acknowledges the attempt by Governor Nyesom Wike to showcase his achievements, the lives of ordinary Rivers people also matter.

“Accordingly, we urge the State Government to halt the jamboree that has become associated with the commissioning of its projects at this time in the overall  interest of the health of Rivers people and all who reside within the boundaries of Rivers State.

“There is no justification whatsoever  for the Rivers State Government to insist that the people and their churches should obey Covid-19 protocols when the same Government is brazenly engaged in breaking the rules put in place for the purpose of guaranteeing public health.

Citing an example of former Governor Amaechi he said ,it is  aware that a government in this State, which  recorded widespread achievements during its tenure, did not for one day engage in the wasteful luxury of commissioning projects.

“Unfortunately, we are saddled with an administration which at the slightest opportunity engages in necessary showmanship. Yet, this same government has been unable to pay the entitlements of pensioners; and unable to maintain the State Secretariat complex.

“We know that out of sheer panic and an attempt to hide its complicit behaviour, Government is contemplating a lock down in heavily affected areas without thinking of how citizens  who have no food and no work would cope with their children,” Nwuke said.