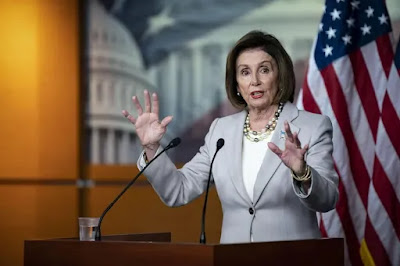 House Speaker, Nancy Pelosi has insisted that no one is above the law.

She said this after signing an article of impeachment against President Donald Trump.

Trump was impeached for a historic second time on Wednesday evening, and Pelosi did the signing, a ceremonial step that precedes the article being sent to the Senate.

The signing makes the article official shortly after it passed the House. Ten Republican members backed the Democrats to impeach Trump.

The President who has a week in office, was accused of inciting his supporters to attack the US Capitol, an incident that claimed some lives last week Wednesday.

Trump was impeached by the House on a single charge of incitement of insurrection.

“Today, in a bipartisan way, the House demonstrated that no one is above the law, not even the president of the United States,” Pelosi said before signing the document.

“That Donald Trump is a clear and present danger to our country and that once again we honor that oath of office to protect and defend the Constitution of the United States, so help us God.”

By this development, the US leader made history by becoming the first American President to be impeached twice.

The House will submit the article of impeachment to the Senate, although a trial is not expected to begin until after next Wednesday’s inauguration.

Posted by Dayoung on Wednesday, 13 January 2021 - Rating: 4.8
Title : US crisis: Speaker Nancy Pelosi speaks after impeaching President Trump
Description : House Speaker, Nancy Pelosi has insisted that no one is above the law. She said this after signing an article of impeachment against Pre...