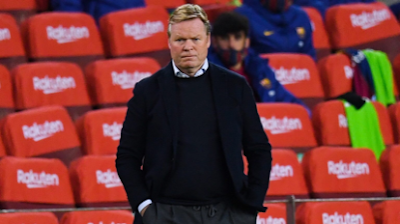 Koeman said this while reacting to Barcelona’s Champions League round of 16 first-leg 4-1 defeat to PSG on Tuesday night.

Kylian Mbappe’s hat-trick and a goal from Moise Kean gave Mauricio Pochettino’s men the victory as Lionel Messi’s strike was not enough.

“That was a cold bath of reality,” Koeman told reporters at a post-match press conference after the game.

“The game showed us we are lacking a lot of things to be a top-level team, especially of the level you need in the Champions League.

“The scoreline reflects how superior they were. They were far more effective than us.”

He added, “The first half was more even, and when we were 1-0 up we had the chance for Ousmane (Dembele), but in the second half we had a lot of problems in defence, and they proved they were much stronger than us physically.”